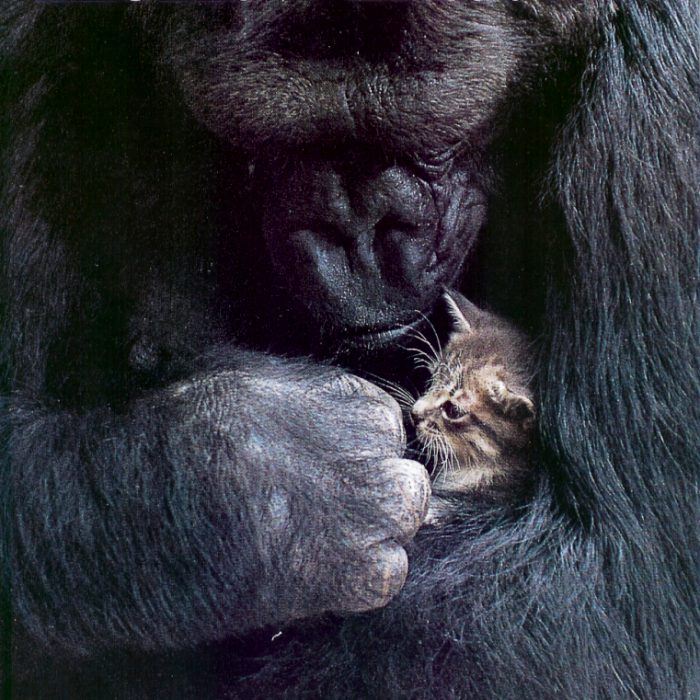 Koko is a 47 year old gorilla who is 5’3/4″ tall, weighs 280 pounds, and lives in Woodside, CA. But what’s more impressive than her height and her size, is that she can fluently speak sign language. Just like humans, she has a favorite color (which is red) and a favorite book The Three Little Kittens. Over the years Koko has adopted and taken care of 6 cats who she became best friends with.  Also, Koko likes to eat nuts, gourmet tofu dishes, apples, and corn-on-the-cob. By caring for her kittens and speaking sign language, Koko shows people that humans aren’t the only animals that can express emotions and feelings.

When Koko was a baby, she grew up at the San Francisco Zoo and Penny Patterson started teaching her sign language. Soon after Koko started learning, she knew 80 words. But, after a while the visitors became distracting and hindered her progress. So Koko moved to Stanford (because Penny was studying there) and after her first year living on campus Koko had learned 200 words. After that, her vocabulary kept on growing – she had learned 300 words and was able to use them in complex sentences/situations. Now living in Woodside at the Gorilla Foundation headquarters, “Koko has a vocabulary of more than 1,000 words”.

Koko has adopted many kittens and has loved each one. When I was watching one the videos of her snuggling with them, I found it so amazing how Koko is so gentle and careful with the tiny kittens. Even though they would have never met in the wild, she shows empathy for them and knows how to treat them with care, love, and respect.  When her first cat got hit by a car, Koko was able to understand that her cat had died and express that she was really sad and even signed “Koko Cry”.

It is amazing how a gorilla can learn sign language, and express her feelings and emotions by using it. Koko is such a kind gorilla, and it is so sad to think that other gorillas like Koko are endangered and hunted in the wild.

Meeting Koko would be really cool, but I wouldn’t know what  to say! If you were able to meet Koko, what would you like to talk to her about?