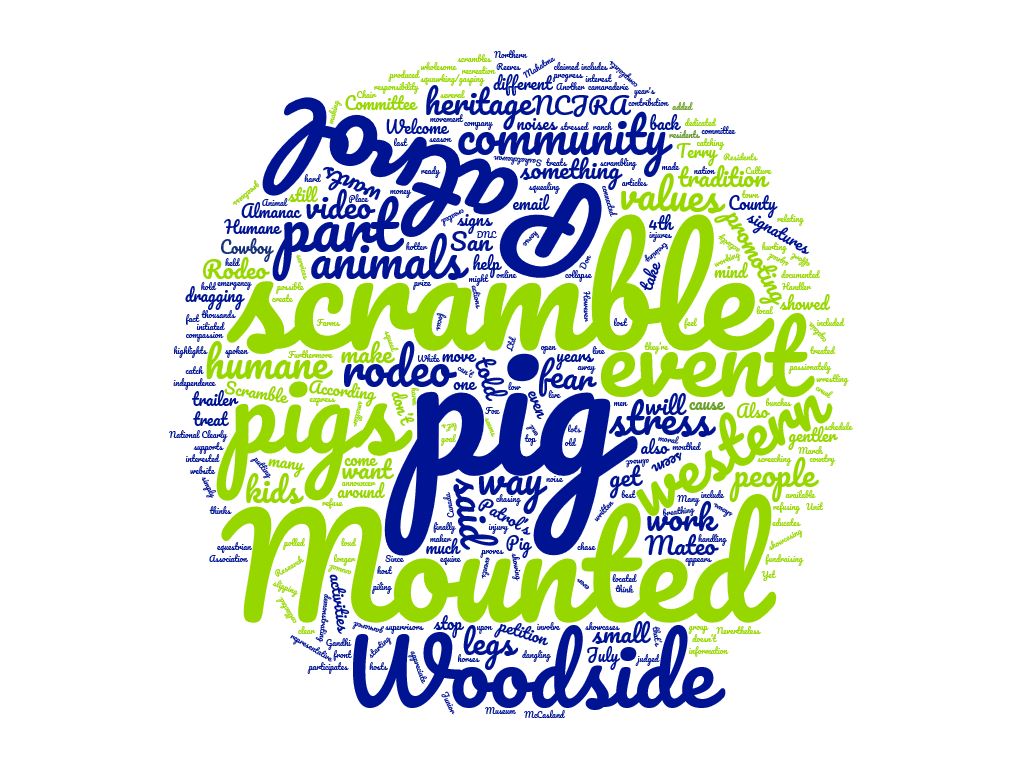 Does Woodside Value the Pig Scramble?

“The greatness of a nation and its moral progress is judged by the way its animals are treated.” – Mahatma Gandhi.

The pig scramble is an annual event at the 4th of July Woodside Jr. Rodeo where small kids chase even smaller pigs and get a prize for catching one. The Committee For a Humane Woodside thinks the pig scramble is a cruel event that injures pigs. They collected over 300 signatures from Woodside Residents in an effort to stop the pig scramble. But, the Mounted Patrol of San Mateo County who hosts the event has a different take on this. They feel that the pig scramble highlights their western values, and does not harm small pigs. Is this event in line with the values our town is interested in promoting?

The Mounted Patrol of San Mateo County is a group of men who focus on promoting horse and equine activities. They are also available to help with local emergency services. The Mounted Patrol has been around for almost 75 years, starting March 31, 1942. According to the Mounted Patrol Foundation website, their goal is to create a community that educates and supports the contribution of horses for work and recreation.

Terry Welcome, captain of the Mounted Patrol, told the Woodside Almanac that the pig scramble is a part of a western tradition showcasing  “independence, hard work, responsibility, and compassion for animals that help do much of the ranch work and camaraderie.”

However, a search of the archives in the National Cowboy Museum yielded no information relating to pig scrambles as a part of western heritage. Also, there are no references to pig scrambles or pig wrestling in the 2017 Northern California Jr. Rodeo Association (NCJRA) rodeo schedules, except for the Woodside Jr. Rodeo.

Nevertheless, Terry Welcome of the Mounted Patrol has said, “the pig scramble is wholesome, a part of western tradition that’s being lost in this country.” But, it doesn’t seem to have ever been a documented tradition.

The Mounted Patrol told the Woodside Almanac that they made the 2016 pig scramble gentler, upon complaints from the community to make it more humane for the pigs. It is clear from a video produced in 2016 that the Mounted Patrol did not make last year’s pig scramble event gentle or humane for the pigs. The Mounted Patrol claimed that there was no dragging the pigs from their legs, yet the announcer said in the video, “the best way to catch them is to hold them by their back legs or their front legs.” The video showed people making loud noises, kids chasing after small squealing pigs, and finally supervisors dangling and dragging the screeching pigs by their back legs or front legs, then putting them into the trailer.

According to DNL Farms Ltd, a low stress pig handling training company located in White Fox Saskatchewan, Canada, signs of a stressed pig include open mouthed breathing, they will get hotter, refuse to move, squeal, make squawking/gasping noises, and they might even collapse. Furthermore, if there are too many pigs in a trailer, if they’re scrambling to get away, piling on top of each other, refusing to move in bunches, or slipping, pigs are showing stress and fear. Handler actions that cause fear and stress in pigs include too many people, too much movement or activity, and lots of noise.

Clearly the pigs in the pig scramble video are demonstrating several signs of fear and stress.

The Committee for a Humane Woodside also created a petition to stop the pig scramble. Over 300 Woodside residents signed it. Another online petition initiated by Animal Place has garnered over 26,515 signatures from people around the world to end the pig scramble. Since thousands of people are against it, why does Woodside still allow this event?